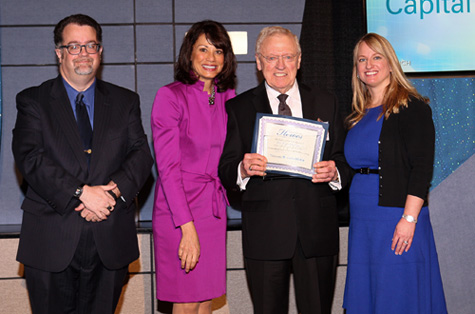 Fenstermacher was just named winner in the Volunteer-of-the-Year category of the Health Care Heroes 2015 program held by Lehigh Valley Business and sponsored by Highmark, Capital BlueCross, DeSales University and others.

"We are delighted that others recognized the outstanding character and compassion Paul exhibits in his volunteer role at Luther Crest," says Mark T. Pile, Diakon president/CEO. Fenstermacher was selected over three other nominees for the award.

In addition to the major role Fenstermacher had as chairman of a capital campaign for Luther Crest, “Paul reaches out to other residents, one-on-one as needed, to provide a helping hand, a word of advice, or compassionate understanding. The epitome of volunteerism, he—like most volunteers—serves out of the goodness of his heart, with no regard for compensation or praise,” says Lin Ferrol, former executive director of Luther Crest, a Diakon Lutheran Senior Living Community in Allentown, Pennsylvania.

In fact, she says, one of the first residents Luther Crest visitors are likely to meet is Fenstermacher, who frequently serves as a one-man welcoming committee and unofficial tour guide. "With high energy and an outgoing personality, Paul is one numerous resident-volunteers who make life at the senior living community interesting and varied," she says.

Lauded for his kindness, the 90-year-old has been a Luther Crest resident for nearly a decade. During that time, he has emerged as a valued volunteer, not only assisting with fundraising campaigns large and small, but also in welcoming prospective and new residents to the community.

Among his activities at Luther Crest, Fenstermacher: